The windy road on the outskirts of the Otago Peninsula offers some of the best views over the harbour. Regardless of the weather on the day, the good mix of green hills, calm sea, native birds, fishing boats and the busy city in the distance always sets the place as an ideal spot to admire a stunning landscape.

In the last couple of years, however, the view has been slightly altered by diggers and trucks moving dirt and rocks along the road. Workers, wearing their bright orange vests and blue helmets, bustle about on the construction site. Their job is to build an extension to the sea wall, widening it by as much as six metres, providing more room for vehicles and space for a shared walkway and cycleway.

The job is huge – in order to preserve the heritage of the site, the sea wall is built with stones hand-placed by skilled masons. The mammoth task has taken years, requiring a very specific workforce.

Stone masons able to work on the sea wall are not easy to find in Dunedin. Luckily, a group of former refugees recently settled in Dunedin had just the right skills for the project.

Red Cross’ Pathways to Employment teams across Aotearoa support people with a refugee background, plan their employment, education, training and career goals and ultimately find work. When Dunedin became a refugee settlement location in 2015, a team was set up to support newly-arrived former refugees, all bringing a variety of skills and dreams to find work or start studying, in their employment journey.

Jarrah’s team contacted the contractors to the project to see if they had any positions available. They first profiled three people with the right skills, and all of them were quickly hired.

“When we were awarded the contract for the sea wall, we were going to be needing semi-skilled labour and reasonably hard-working people. Fulton Hogan approached QC contracting, after Red Cross suggested the idea,” says Mark Lamb, owner of QC Contracting in Dunedin, leading the sea wall extension.

“We needed a workforce, a certain number of hardworking people. It’s not the easiest of jobs. You’ve got to be a fairly ‘tough nut’, for a lack of a better word, so they are not around every street corner. Yes there was a language barrier obviously that we had to get over, but I think the main thing was if we had willing people, which we did, they were worth having a go and we’d see if we could overcome any barrier that might come ahead. So, really, we needed them and that’s how it started,” 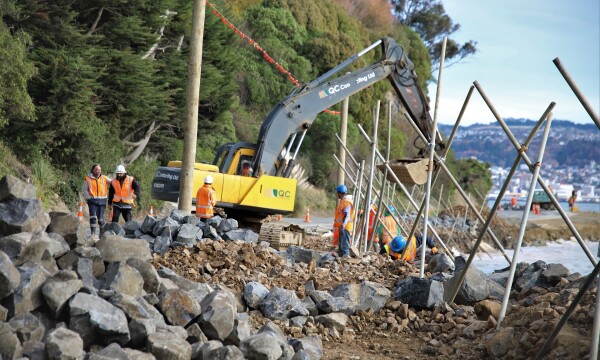 Teams at work on the sea wall construction site in Dunedin.

After receiving positive feedback from QC contracting, New Zealand Red Cross’ Pathways to Employment team in Dunedin looked for more refugee-background workers with experience in construction. The first three stone masons initially hired acted as mentors and interpreters on site for the newcomers.

“I can only really say from that point of view, that they have worked out well. I’d say to other employers to give it a go! Once you get over the language barrier, and I’m sure you’ll find it too, you’ll find them reliable and hard workers,” says Mark.

“Red Cross has thanked me for taking them, and actually I’d thank Red Cross for setting them up. They’ve been a really good thing for our contract and this business.”

Finding work has been life-changing for these new Kiwis, including Mahmoud Alashour who fled the war in Syria and was eventually settled in Dunedin.

“I like my job very much. Back in my country, I worked in street construction. Life without a job means nothing. The completion of life is to get a job and be stable in the job, so I am very happy and comfortable here,” explains Mahmoud.

New Zealand Red Cross has helped place ten former refugees with QC Contracting to work on the sea wall extension – a partnership which has multiple benefits.

As Jarrah explains: “The sea wall is expected to last longer than 150 years, so it will remain a testament to the hard work of the cohort of Syrian former-refugees to be settled in Dunedin.” 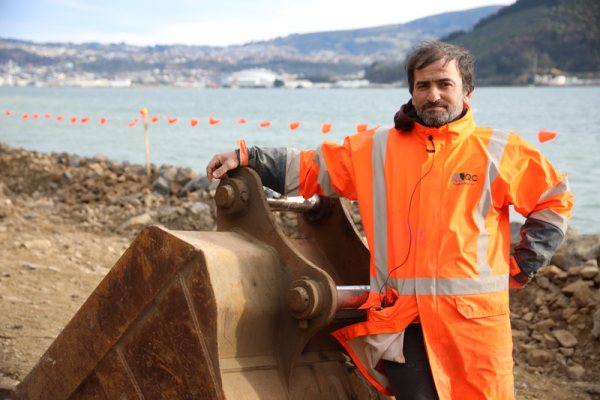 Get your business involved

Finding employment is a key part of the settlement process. It gives former refugees financial independence and also offers them the opportunity to use their skills and contribute back to their community. Our team is always looking for keen employers to get in touch and discuss opportunities.

As the construction of the sea wall in Dunedin is nearing the end, and the beautiful view over the harbour will no longer be obstructed, Jarrah has a message to other employers in the region:

“The group of workers that are currently working there have received very positive messages from the employer. So, if there are local employers looking for a team of hardworking, work-ready guys, contact us and we’ll facilitate any meeting.”

If you are an employer keen to hire workers with a refugee background in one of our settlement locations, get in touch.