A bittersweet escape from Kabul

Amid the chaos of Kabul in August, Afghan pharmacist Zamir waited outside the airport wondering if he would ever safely make it out of Afghanistan to be with his fiancé on the other side of the world. Read about his courageous journey to a new life in Aotearoa New Zealand.

With a clipboard in his hand, Zamir stands in the study room of the Medical Research Institute of New Zealand, checking and itemising pharmacy items for dispatch.  It’s a world away from where he stood four months ago, in a wide ditch of filthy water outside Kabul airport, desperate to get the attention of the New Zealand Army soldiers who stood on the steep banks above him.

Three years earlier, Zamir had been introduced by his cousin to a young woman called Sajida, a former refugee from Afghanistan who had resettled in New Zealand in 2014. They chatted on the phone and online and at the end of 2020, although it was dangerous, Sajida made the journey to Afghanistan to meet Zamir face to face. After three months together they became engaged and Sajida returned to New Zealand to apply to bring Zamir home to be with her.

Zamir, a pharmacist, waited in Kabul while Sajida struggled with the immigration process in Wellington. During this time, the Taliban began to take control of towns and cities across Afghanistan. One by one Zamir watched them fall. He and Sajida spoke often, and one day in August he reassured her the Taliban had said they would not come to Kabul for another six months — he had time to wait for his New Zealand visa. But the next night, they came.

Back in New Zealand, a frantic Sajida contacted Immigration New Zealand, the Ministry of Foreign Affairs and a lawyer, but at that time, no one could help her. “For two weeks I couldn’t sleep, I couldn’t eat. I didn’t know what to do. Zamir was telling me armed groups were going into people’s houses and taking some people away. He didn’t know where.”

The New Zealand government had just introduced humanitarian visas to evacuate people from Afghanistan who had connections to New Zealand. Sajida applied for Zamir, and incredibly, within two days the application was approved.

“Zamir didn’t believe me. After all we had been through with the visa process, he thought I was joking. He had to see the letter to believe it was real.” It was no joke and the next day Zamir joined the chaotic and desperate masses outside Kabul airport. Sajida kept in constant contact with him by phone, trying to guide him through the chaos from the other side of the world.

They knew he had to find ‘Abbey Gate’, but no one, including the authorities in New Zealand, knew where this was. Eventually they discovered it was not an actual gate, but just a space outside the perimeter of the airport where a dirty river flowed past.

For one whole day and night Zamir waited at the ‘gate’ with hundreds of others, often standing in the water which smelt so bad it was hard to breathe. He kept calling out “I have a New Zealand visa!” and waving a New Zealand flag. Finally, the New Zealand soldiers saw him. “They gave me their hands and pulled me up onto the other side of the bank,” Zamir remembers. 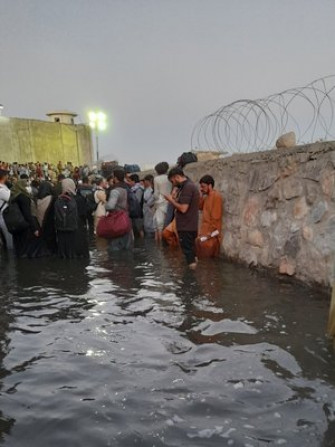 Hours later, he was in a NZDF helicopter, making his escape from Kabul. But the anguish for Sajida back home was to continue. She had lost phone contact with Zamir and had read the news a suicide bomber had detonated at Abbey Gate — killing dozens. She did not know where Zamir was. While she eventually got news he was not at the gate when the bomb went off, she still didn’t know he had safely evacuated and had to wait two more days to reconnect with him when he landed in Dubai. The next day, Zamir would be on his way to New Zealand. Leaving family behind, a brother and two teenaged sisters, it was a bittersweet journey for him.

“Although I was so happy to be leaving Afghanistan and to be feeling safe, I am very scared and worried for my family,” he explains.

After spending time in MIQ in Auckland, at last Zamir was able to board a plane to Wellington. Sajida remembers — “I was so happy. I met him at the airport and hugged him. But although Zamir said he was happy to be here, I could feel that he was conflicted. He was so worried for his family and sisters he had left behind.”

Sajida and Zamir busied themselves trying to set up a life together in Wellington. Sajida dreamed of a career in a hospital but for now was working for a security firm. She told Zamir, a pharmacist with three years medical training, it would take a long time to find work and he should take any job for now.

But within a month, Sajida received a message from a New Zealand Red Cross Pathways to Employment worker – she had arranged an interview for Zamir with the Medical Research Institute of New Zealand (MRINZ).

They could hardly believe their luck. Sajida asked the Red Cross volunteer who had helped her for the last seven years — Jenny — to come with them to the interview for support. The trio sat opposite the MRINZ director, Professor Richard Beasley and deputy director Professor Alex Semprini, and speaking with the help of Sajida, Zamir convinced the interviewers he was a good fit – he was hired. When the interview finished there was another surprise says Sajida.

“Suddenly Mr Richard asked me ‘And what are you doing?’ I said I was working at a security company but I wanted to study medicine, and he said ‘Well would you like to work here instead?’ I was so surprised! And I said yes of course I would love to, I didn’t ask what I would have to do I just said yes!”

Zamir and Sajida are now both working part time at the institute and are excited for their future. “Everything is good. The big thing is to find these jobs – we are blessed. There are a lot of friendly and helpful people here. It’s like magic it happened. We couldn’t believe it,” says Sajida.

The next big challenge is to find a house, difficult for any Wellingtonian, however they are patient and hope something will come up soon.

Zamir is in contact with his family. Everyone is OK but his sisters, who love to study, are not able to go back to school. He hopes he can bring his family to join him in New Zealand but that will be another journey.

The young aspiring doctors from Afghanistan are very grateful for all the assistance they have received from New Zealand Red Cross, government agencies and other refugee support organisations.

Zamir hopes to get all the experience he can at MRINZ and use this as a stepping stone to medical school.

“I can’t pay New Zealanders and the government back for what they have done for us financially, but I hope to pay back by becoming a doctor and helping people here.”

“It’s very good here,” Sajida adds, “Thank you so much to all the people who are helping us a lot.”