Ngun Kung has travelled a long way to achieve his dream of a simple, stable life. After being forced to flee his home country several years ago, he couldn’t be happier with where he wound up.

It is a brisk Autumn morning when we meet with Ngun Kung and his employer Robert Gibson at Allwood Products Ltd in Nelson. Allwood Products creates kitset timber sheds and cabins, so the site is abuzz with the sounds of saws and sanders, with a few coffee cup clinks thrown in for good measure.

Amidst all the activity, it is easy to find Ngun Kung, a former refugee from Myanmar whose Duchenne smile can be seen from a mile away. He has been working at the company for six months, and has no plans to leave any time soon.

A long journey to find home

After leaving Myanmar, Ngun spent several years as a refugee in Malaysia, waiting for the day the United Nations High Commission for Refugees might let him know that he had been offered resettlement elsewhere.

That day finally came in 2018, when he was offered resettlement in Aotearoa. He has now been living in Nelson for almost three years.

In Malaysia, Ngun worked as a painter and electrician on a number of building sites. After arriving in Nelson and studying English at English Language Partners (ELP) for a few years, he was eager to re-enter the workforce as soon as possible.

Red Cross’ Pathways to Employment team in Nelson helped Ngun secure a two-week painting internship to gain work experience in Aotearoa. He then successfully applied for this job at Allwood Products.

“Red Cross was a good help,” he says. “I like the building. Robert is good. Kiwi people are good.”

Many former refugees like Ngun have faced countless struggles throughout their journeys to Aotearoa. From fearing for the lives of themselves and their loved ones to seeking a safe place to call home, it can take a long time post-settlement to realise that they are no longer displaced. They have a home, and they are safe.

The financial and personal security this job has provided Ngun is monumental. He is now able to support himself, as well as his family who remain in Myanmar.

“I send money to my mother and father in Myanmar. Everything else, I save. I want to keep it safe. Someday, I want to buy a house.” 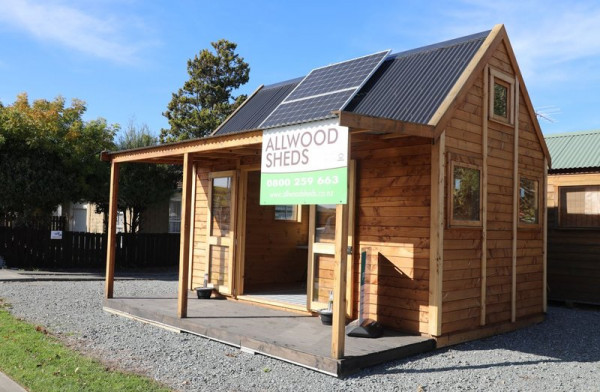 New Zealand Red Cross’ Pathways to Employment programme supports former refugees who want to develop their career plans, and works with employers who are looking for prospective employees with refugee backgrounds.

It was through the Pathways to Employment programme that Robert Gibson, Manager of Allwood Products Ltd, came to hire Ngun in late 2020. Prior to this, he had hired three other former refugees with the support of New Zealand Red Cross.

“A local representative [of Red Cross] introduced himself to me one day,” says Robert. “We had a good discussion, and it went from there. He introduced me to Lian – our first employee through Red Cross – and we were very impressed with him, his work ethic and whole demeanour.”

Despite the initial language barrier, Robert found they had no trouble communicating.

“I was quite keen then to see if we could find another person from Myanmar because it’s not that easy to get people that have a good work ethic and know their timber.”

“We’ve had a lot of support [from Red Cross],” he says. After Robert’s earlier reservations regarding the language barrier between himself and his new employees, Red Cross helped connect his team to Work and Income, who offered a subsidy that helped the whole process.

“It’s a six-month subsidy [called Flexi-wage]. [Work and Income] pays a percentage of the wage. The subsidy diminishes over time, as the person gets more and more acquainted with the job. It basically means that we’re not employing somebody who has no idea what they’re doing – they have time to learn. For us to train someone, we’re not getting the maximum benefit out of them initially, but over time it sort of works so that we eventually take over and they’re on full employment.”

All but one of the former refugees Robert has hired through the subsidy system have stayed on. He couldn’t be happier to have them on board.

“They’re an asset because they have a good work ethic and they respect you,” he says. “They respect your fellow employees. They just get on with it, really. If I, as an employer, can come in and see production – as long as they’re doing a good job, I’m happy.”

Keen to get involved?

If his business were to expand in the future, Robert would have little reservation about hiring more former refugees. He would encourage other businesses to consider doing the same.

“It works for the employer and the employee. It’s a good relationship. They’re good people, they’re nice, well-mannered, they have good ethics. I couldn’t be happier as an employer. It’s good.”

Our Pathways to Employment teams work with employers across the country to find their 'perfect match' in candidates who have skills and personalities they're looking for. Our teams can support the process with language training, inductions and job interviews. If you think you may have a job opportunity (or two) for former refugees in your business, get in touch with your local team.